perth day 3: a tiny glimpse of the great outback.

The first time I visited Australia in 2003, I went skiing at Mount Hotham with Daniel Heng and went to the Blue Mountains with Daniel, Ps Cuixian and Manrong. The second time I visited in 2007, I drove on the Great Ocean Road and saw the 12 Apostles. This time, I went to see the vastness of The Pinnacles and even went sand-boarding! I know this is over-mentioned but how can one not marvel at the awesomeness of our Creator when he or she has witnessed such marvelous natural wonders?

However, we nearly did not make it on this tour that we signed up for yesterday.

As usual, due to me waking up (slightly) late(r), we had to sprint from Coolbellup to Perth City and did not factor in peak hour traffic and navigation unfamiliarity in our planning. (Okay, actually Huiyi did, but I did not, but since we are engaged I used the collective – we – Haha!) So as we frustrated each other in the car, negotiated with an uncooperative Google Maps and took a wrong turn, we still managed to make it to the pick-up point just one minute late. The result of that however, is to pay for a day’s worth of parking (!) instead of the original plan to park at Liang’s apartment then walk to the pick-up location at Pier Street.

We have both learnt that when we quarrel, it’s like the rhino charging at a hedgehog – and both get hurt. So we naturally gave each other some time-out as we recovered from the adrenaline of chasing a departing coach. Things resumed normalcy once we woke up from a short nap in the bus.

Our first stop was at the Caversham Wildlife Park, where we saw, touched and interacted with three marsupials – the koala, wombat and my all-time favourite (for obvious reasons) kangaroo. At this point, I want to correct a common misconception. A joey isn’t just the young of a kangaroo, but of all marsupials; as long as the creature resides in a pouch after birth, it is referred to as a joey. I learnt that from National Geographic and the park guide confirmed it. I was tempted to introduce myself as Joey, but decided against it as it would be too cute and attention-seeking for a 28-year-old man. Haha! Man, I’ve really aged.

We arrived at the Cervantes Lobster Shack after another hour’s drive. I learnt some new things about the lobster industry. For example, conservation rules disapproves of catching lobsters that are either pregnant females, too young or males reaching fertility; lobsters caught with three or more missing legs are not included into its main sales but into miscellaneous categories like sashimi; the difference between lobsters sorted into Category A and G are 300 grams and a whopping 2 kilograms respectively and each category has its own market.

The older I get, the more curious I become; I could never imagine myself remembering or even being mildly interested in such trivial information when I was younger. Age seems to imbue a hunger for knowledge. Is it like that for you? 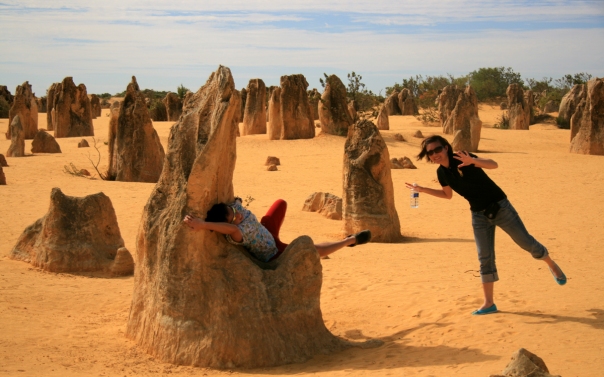 Finally, we arrived at The Pinnacles. We were accompanied by an army of flies as we walked into the centre of the attraction. Once we were about 1 km in, its vastness simply engulfed you. There were unique rock formations in every direction you looked. And I also witnessed the perversion of Man at work. While there was a rock formation that eroded into the shape of an erect penis, I also saw two smaller rocks at the base of that rock – obviously the work of mischievous visitors.

Next up – sand-boarding at Lancelin! Man, I have never seen so much sand in my entire life! The way the wind caressed the sand mounts was poetry in motion; the unseen wind was made visible with the presence of the fine white sand and that resulted in beautiful yet delicate sand formations. I could never imagine myself at the top of a sand dune but there I was, negotiating with the blistering wind as it violently stroked my exposed body parts. I froze a few times midway through my ascent as the sand got into my eyes (though I thought I had it protected by my Oakley’s)!

I felt as if the Spirit impressed upon my heart a few lessons about life from that novel experience of sliding down a 30 metre sand mount:

So there you go, my reflections on day 3, churned out on the return journey back to the city.

We are going to pack some chili mussels from Concas and purchase some soft drinks before we return to Leontes Way to prepare dinner and rest even earlier tonight. Can’t wait for the road trip!