happy mother’s day – I’ll tell you why my mother is a remarkable woman by any measure.

It’s Mother’s Day! I’m single-dating her tonight and I hope that she would have enjoyed the food and the company of her favourite son (Ha!). And since I (think I) am a writer, I will of course blog about my mother on this day that rightly belongs to her.

Mummy, I know you’re reading this – I love you and I want you to know that I am immensely proud of you for raising Maisie and me. You have done a remarkable job with your limited resources and no amount of words will do justice to the sacrifice that you have put in. But I do hope that you will be honoured this way – because I respect and love you very much. 放心，我和妹妹会照顾你的！

I found the transcript of an email interview my mentor Peter Lim conducted with me. It was part of his article for Motherhood magazine. And I was hoping that this may turn out to be a good read. This document dates back to June 2006 – so what you are about to read is my perspective half a decade ago, when I was still in the Army. And I’d like to think I’ll probably answer these questions in the same way if I am asked again today.

Anyhow, I’m publishing the document as it is. Enjoy the read. (:

1. Do you mind if I title it (the article): “Our mum is a divorcee”? And you can send me a happy smiling picture of yourself and your sister?

>>> Ya, actually I do mind. Because I never saw her as a divorcee. So I don’t want others to think that we think of her that way. In my head and heart she’s one amazing super mother. She’s living proof that you can raise two kids properly without a husband and with income that could only make ends meet. Her sacrifice is second to none. Perhaps you could skew your title to something with sacrifice? I’ll leave the coining of the title to you then.

2. How old were both of you when your parents divorced?

>>> Maisie and I were 5 and 8 years old respectively when our parents officially divorced.

3. Did you know why they divorced?

>>> Over the years, many different reasons have surfaced; some were conventional ones like financial disputes and failure to meet expectations, but there are also a couple of reasons that I cannot share because it’s just too personal. Both our father and mother gave us different perspectives on why the marriage failed; and of course they absolved themselves of any traces of blame. When we were younger we couldn’t understand why, but now that we are older, we see a much clearer picture by piecing all these information together. We’d blame neither of them for what has happened – or we’d blame the both of them.

4. What were your reactions then? (Or were you too young to understand?)

>>> At 5 and 8 years old, I honestly think we were too young to understand. The fact that I existed in a single-parent family only hit me when I was 15 years old. It hit my sister too, but differently. I hated my father for not being around, for not lighting my path to manhood, for not disciplining me etc., etc. Kids who have their fathers by their side through their growing up years will never understand what I went through so I’d say to treasure your father – they are a gift from God to their children. My sister struggled with another set of hurts; once the apple of her father’s eye, she found herself “demoted” to second-best when my father remarried and his wife bore him a son. She was no longer daddy’s girl and not being able to approach our Papa like the loving father that he used to be that hurt her the most.

5. What do you feel is missing (if anything at all) from a single-parent family?

>>> Nothing is missing from a single-parent family. 3 is a whole number and not an odd number. Our mother has done such a remarkable job at playing different roles you couldn’t tell that we were from a single-parent home. It did help that we became Christians; in church, we’ve been blessed to have a lot of brothers and sisters, both young and old, to love and protect us. Our maternal and paternal relatives are also a closely knit group. Maisie and I were never lacking in any area.

6. Do you compare yourselves to friends who have both parents in their growing up years?

>>> Comparisons are inevitable. We look at “complete” families and although we are delighted for them, we also feel a tinge of envy. But we wouldn’t have traded our single-parent upbringing for an “ideal” family (by the world’s standard). Our family background has allowed us to experience things that some kids would never even imagine. It has made us stronger, wiser and certainly more independent than most kids. We are more aware of what’s going on around us and there’s this unmistakable drive that Maisie and I both have; I firmly believe this was birthed out of a unique upbringing.

7. In your parents’ case, was there anything positive in being divorced (from your perspectives, not theirs)?

>>> Our mother married our father when she was 20 years old. She had her firstborn at 22 years old. While it was common for women in the past to marry early, it also meant that she never had the chance to “see the world”, and had to care and provide for her own family at a premature age. The divorce allowed her to expand her horizons, social circle and of course the way she perceives things.

>>> For our father, as he was the initial custodian to us both, his life revolved around us. His first and last thoughts of the day were of and for us. He was quite an extraordinary father. However, due to circumstances, my sister moved in with my mother after a couple of years, and I followed suit after another couple of years. I believe my dad’s life picked up from there. To date, I’m not sure if the path he chose (to start another family) was what he desired, or what he needed to do to feel normal again.

>>> Both of them have become a very different person from who they knew each other to be.

8. What’s your advice to parents who are divorcing/divorced, in relation to consideration for their kids?

>>> Regardless of marital status, always be there for your children whenever they need you. Your children belong to both of you, not one of you. It is possible to raise good and sensible kids even if you are divorced, but it requires an intentional and active sacrifice. Time is the greatest gift you can give to your children. Your presence makes a difference in their lives so don’t let your absence become the difference in their lives. 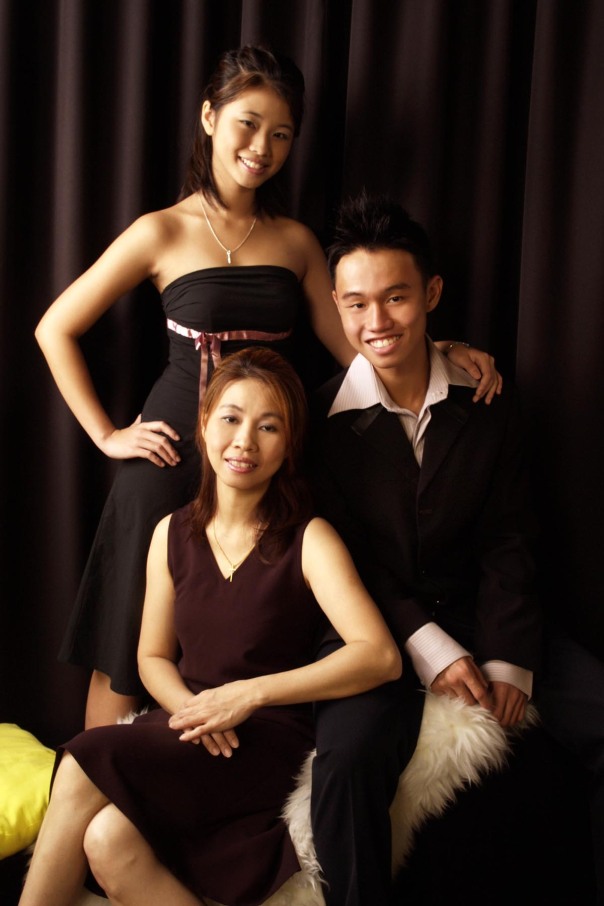 Three is a whole number – still happy and smiling today.