II. the crucial milestone – her family must know.

I might be a traditional and conventional guy, but I truly believe that one of the most important things to do before a man ever proposes to his wife-to-be is to first seek the support of her parents. It doesn’t just do a world of wonders for the man in the longer run, but it also gives the lady the immediate assuredness and confidence to say, “Yes”, because she knows that her parents are behind her on this.

Both of us are regular Chinese Singaporeans brought up in typical Asian homes. It was only wise for me to get her parents involved when I was ready to pop the question to take it to the next level.

Actually, I had already wanted to propose last year (2010) but I decided to wait until I had met all her paternal and maternal relatives. I wanted them to know who I was, regardless of whether they were close to Huiyi or not. It seemed the proper and respectful thing to do – to know her entire family before asking her to be a part of my family. And I managed to do that on New Year’s eve.

Huiyi and I have spoken about marriage ever since we entered our second year of courtship. Initially, she felt she was a little too young to get married but as we entered the third year, part of her couldn’t wait to settle down with me. For me, I felt that I wanted to settle down with her from the day I asked her to be my girlfriend. Marriage (and the proposal) wasn’t an uncommon topic to the both of us.

Some people may think that it’s unromantic to declare engagement intentions, but I’m a realistic romantic and a romantic realist. I do what I think is culturally sensitive and consistent to my upbringing and the dynamics of our relationship. After all, my track record of idyllic moments with Huiyi has been good (so far), so it didn’t bother me the least bit that she knew I was about to propose. I knew her answer but all she knew was my time frame; she had no idea how, where or exactly when I would do it.

Huiyi’s parents are smart people. They knew that I was a forward-planning person and that I don’t do things without careful consideration. When Huiyi helped me to arrange a dinner date with them, I believe that they could almost see it coming. After all, we had dinner together on Valentine’s Day this year. But nothing in their many years of good parenting would prepare them for this moment – to deal with the impending reality that they were about to marry off their precious daughter.

Dinner was supposed to take place at Peach Garden, where I’ve already made reservations for four a couple of days in advance. I am traditional and so I wanted this dinner to be a prim-and-proper meal. But Huiyi’s prudent father forbade me from bringing them there, so we had dinner at Ichiban Boshi instead. It was obviously four times more affordable and dining at a Japanese restaurant brought about a feel-good feeling. After all, it was at Sushi Tei that I sought their approval to apply for a HDB flat together with Huiyi.

But unlike at Sushi Tei more than a year ago, Huiyi and I never felt that the moment was right for the all-important question of the evening. So with hand-squeezes, leg-tapping and tell-tale glares, we decided to adjourn home instead after a hearty meal. Huiyi gave me insider information (from daily car rides with her father) on how despite her parents being traditional, they preferred an informal setting instead of a formal one.

“Take a chill pill,” they would have said.

Next chapter: the most awkward moment of the evening.

I. the elements of a memorable proposal. 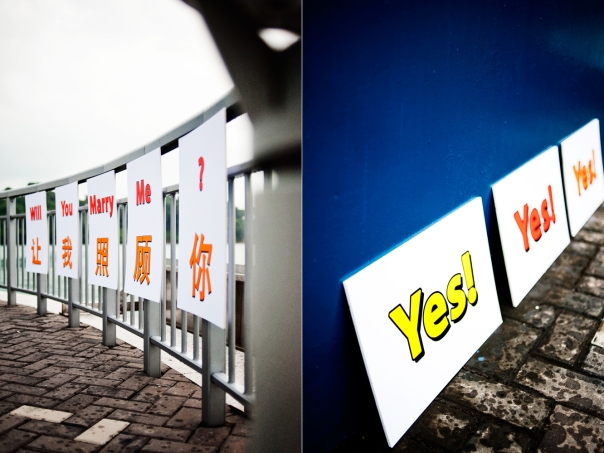 The most memorable proposal is the one that you and your spouse-to-be star in. No amount of eloquence or vocabulary can describe the elation, exuberance and ecstasy that a newly engaged couple experiences. Nothing is better than that unbeatable feeling of knowing that you’ve taken a significant step to spend the rest of your lives together.

I’ve spent days writing this – capturing every event in my remaining memory in writing. And while it has been a tedious process because of my meticulousness, I have thoroughly enjoyed reliving every moment. This writing exercise has, without a doubt, made me appreciate my relationship with Huiyi and anticipate our future together even more.

Speaking of matrimony, I’m about to turn 28 years old and have lost count of the number of times I’ve been involved in and invited to weddings. More than half of my closest buddies are already married and I’ve had countless privileges of being the best man, groomsman, emcee, worship leader and wedding singer. It has been, and still is a wonderful thing to share in one of life’s most significant memories.

The small problem with being a part of so many weddings is that when it’s time for me to propose, part of my personality make-up would inevitably want to make my proposal a tad bit more distinct than any other that I’ve had a hand in… (Again, I reiterate that your own proposal is the most special, simply because you are the protagonist.)

Now, I’ve only had two guidelines when I planned how I would ask Huiyi to marry me:

Before I describe the actual proposal, I will recount the events that led up to it, including the numerous ideas I also considered and would have executed. And somehow, all these ideas actually contributed to the eventual idea.

Next chapter: the crucial milestone – her family must know.