XXXII. the first meal together as an engaged couple.

We finally checked into Privé (which by the way is translated as “Private” in Dutch), where the waitress had been expecting us to return to reclaim our belongings.

I had called the restaurant earlier and asked for the best and most “privé” seats in the house, explaining that it would be our first meal together as an engaged couple. I also asked if Privé had any special arrangements for birthday celebrations. 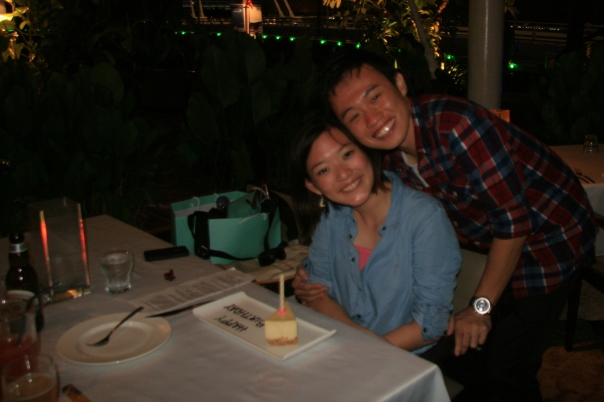 The manager ushered us to the end of the restaurant, where it felt exclusive and quiet (and certainly “privé), and we commenced our alfresco dinner. We treated ourselves to:

As we waited for the food to arrive, I showed her the self-composed lyrics of my Chinese song and explained the meaning to her. I also described the process of producing the ring, the coordination required for today and the amount of dedication that the crew put in for us, amongst many other things.

She admired the ring and was still taking in full effects of the life-changing hour that just whizzed her by. She didn’t say much, but her absolutely contented smile spoke volumes for me.

Before the food arrived, I asked Huiyi to call her family to tell her what happened. At this point in time, only Xianyi in the Lee clan knew that there would an engagement party later.

So even as Huiyi was regaling the recently-concluded proposal to her parents, Huiyi and her parents had absolutely no idea that there was going to be part two.

I asked Xianyi to only tell his parents about the engagement party after Huiyi’s phone call. Yes, I left absolutely nothing to chance.

While Huiyi was on the phone, I approached the restaurant manager to ask if they had an iPhone charger in the premise. The evening wasn’t over and I desperately needed to charge my iPhone with only 4% of battery power remaining. Coordination work wasn’t over and I needed to power up!

When the food arrived, we prayed together for the first time as fiance and fiancée and gave thanks for the food. It was a special moment indeed. And we took our time to enjoy the delectable food.

She was thoroughly surprised and completely grateful for the extravagant proposal. She thanked me profusely for all the effort I put in. I smiled and acknowledged. She’s the only one that I’d do it for.

But she had no idea that the evening wasn’t over… 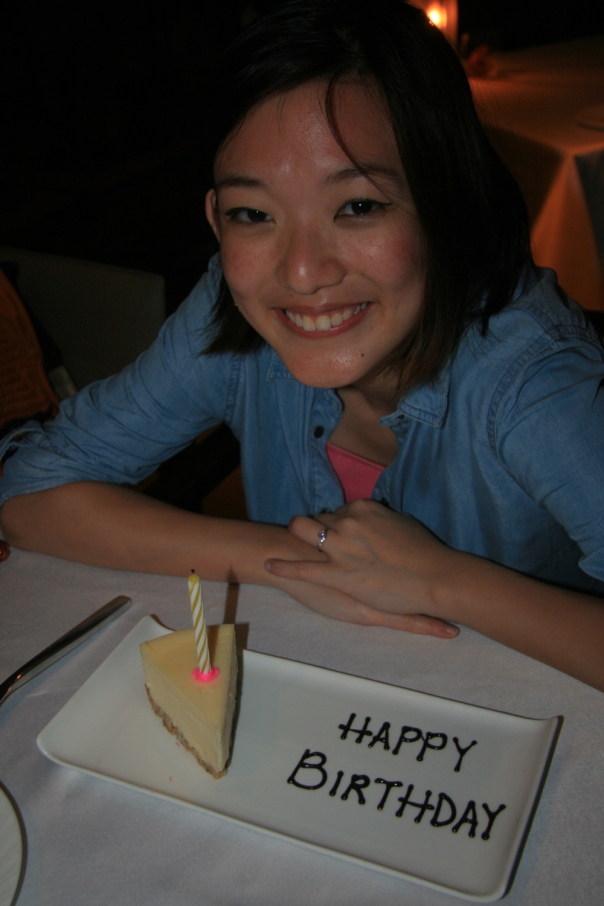 Next chapter: the drive back to Lakeholmz.

Time for you and I to catch our breaths! *phew!*

At this time, I’d like to invite you to see this proposal story through my fiancée’s eyes.

I’ve always enjoyed reading Huiyi’s insights. After all, she is a lady of few words so when she writes, I simply savour her every word!

Huiyi’s mini-series contains a delightful climax in itself, so do read it in sequence to fully enjoy it! (:

So there you go, four different entries by my fiancée for your reading pleasure before we head into the final act of the proposal story! 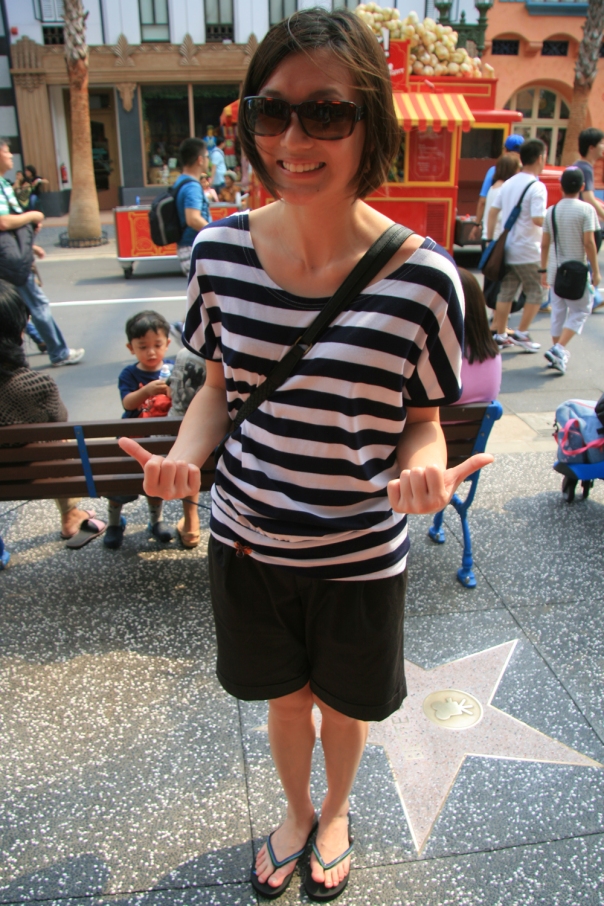 XXXI. the question we’ve all been waiting for.

I finished the song, put my guitar away, and asked her to turn around to see the other five placards behind her. Yes, she was still in shock. (Wouldn’t you, if you were her?) I reveled at her reaction, knowing that my Perth decoys worked to perfection.

Yes, I knew in my heart that the grand surprise proposal was a smashing success! It was worth every inch and ounce of effort put in! What a spectacular result that went beyond my expectations!

I gave her a little over three seconds to savour the moment.

Then I dropped to one knee, removed the engagement ring from the ring box and popped the question. I had rehearsed this a million times but something like this is beyond anyone’s preparation.

I had always wanted to be unique in the way that I phrased the million-dollar question but I thought, “Ah, what the heck, let’s keep it simple and straightforward!”

So I simply asked her, “Will you be my wife?”

(At this point, Yvonne was nodding away furiously as if to egg Huiyi on…)

Huiyi paused, and knowing her, she probably had a billion inner conversations in her head in that two seconds. Then she looked at her three placards and bashfully told me, “YES!”

This was the happiest moment of my life! Of course I beamed to no end – I was delirious!

By now, I was completely drenched. So Huiyi put aside the orange umbrella, stepped into the rain with me, brought me back to my feet, held my hands, kissed my lips, and gave me the longest and most assuring embrace I could ever ask for. With that, she convinced me that I was the man whom she was going to spend the rest of her life with.

This was it! We were now officially engaged and probably the happiest couple on the face of this planet!

We returned to the clubhouse in complete bliss. There, we thanked the crew for their hard work and dedication, and parted ways with them. Gideon and Caleb were soaked to their undergarments; they went all the way for us and we will always be grateful for their critical roles in capturing our engagement.

“Thanks everyone – see you this weekend!” We bade them farewell as they disappeared into the elevator while as we sashayed into Privé.

Next chapter: the first meal together as an engaged couple.

The walk from the clubhouse to the pier must have been at least around 600 metres. We took nearly 12 minutes to get there. By then, my right arm carrying the heavy umbrella was about to give way and my left arm carrying Huiyi’s bag was completely drenched.

It was such a long walk that I had to reassure her countless times that we were about to arrive. The further we walked, the heavier the rain poured and the darker the sky became. In my mind, my hope for a sunset vanished with every passing minute.

And you know the sunset is over when the street lamps start to glow.

By the time we arrived at the pier, the placards had already lost its adhesive power to remain on the railings. Yvonne improvised and leaned these placards along the railings instead. She looked like a cartoon character carrying a blue polka-dotted umbrella, guarding a $3,000 guitar and five placards that read, “Will You Marry Me? / 让我照顾你”. All this, by herself, as she waited for nearly 30 minutes.

When we finally arrived at the scene, I whispered “Hold the umbrella and enjoy the music, dear!” loudly into Huiyi’s ear. Then I strapped on my guitar and reached into my pocket for my plastic pick. I made a final mental run-through of the chord progression and the Chinese lyrics.

I looked at my iPod and realised that it was still playing the third song so I skipped that track and moved to the fourth song immediately – the original version of 让我照顾你. I left the song to play for just one minute (so that Huiyi would register it in her head), then I pressed “Next track”.

At long last, Huiyi was listening to my version of 让我照顾你

I signaled to Gideon and Caleb that Huiyi’s blindfold would be removed in less than two minutes. And they got into position. I decided to give Yvonne the honour of removing the blindfold. And she took her place beside Huiyi.

They were ever-ready. I was more than ready. This was it already!

On my cue, Yvonne proceeded to lift Huiyi’s blindfold.

Huiyi finally regained sight and had all of five seconds to take in what was going on around her – the venue, the rain, the crew, the guitar, the three “YES!” placards Yvonne slotted into her hands, the drama of the moment… And her fiancé-to-be standing in the rain, ready to belt out the song of their courtship.

EVERYTHING led up to this moment.

I looked into her eyes, and chorused 让我照顾你 as earnestly and as sincerely as I could.

Huiyi stood there with bewilderment in her eyes. She was shell-shocked to say the least, and was still trying to get her head around what was going on. She had no idea this was coming her way… Nothing in life prepared her for this moment…

Next chapter: the question we’ve all been waiting for.