XXIX. the wait is finally over!

The three blindfolds she could choose from were an indigo one, a cream one (which the crew advised me to choose), a Sharingan one (thank God the crew banned me from picking this one from Naruto… On hindsight for it would have turned the entire proposal video into a comedy!). 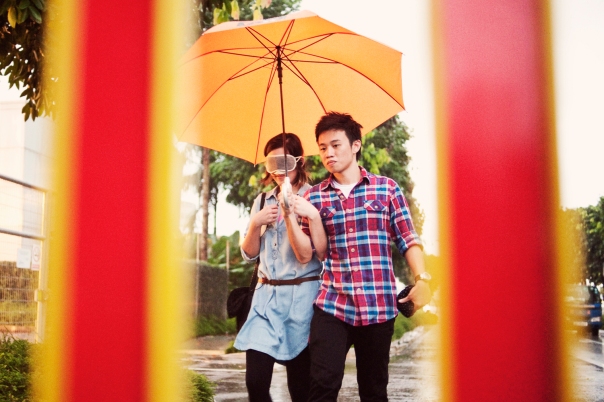 With her concealment gear on, I left her for a split second and ran into the gents to get Gideon and Caleb to come out. Then I dashed over to the Privé reception and told them my name and that I had reserved two seats for tonight.

Then I chucked my barang-barang with the waitress who served me. I told her proudly and beaming, “Please look after my stuff for a while. I’m going to propose to my girlfriend now!” and scooted off to Huiyi’s side.

It was still pouring when I was ready to set off so I took the nearest available umbrella I could find – Gideon’s. This time it wasn’t broken and flowery anymore. It was bright orange and it added a wonderful “fun” element to the video (that would be produced later). 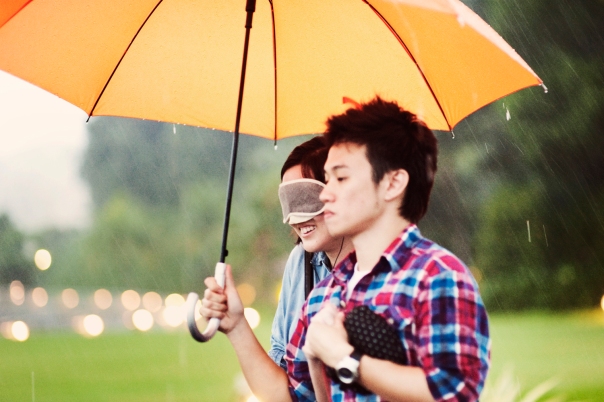 One of my favourite photos - it has that 下一站幸福 feel about it!

Orange was, after all, one of my top three favourite colours as well as one of the colours at the engagement party later that night. It was a great contrast to the doom and gloom of the thunderstorm. And it was picture perfect as far as I was concerned.

I held the heavy umbrella as she held on to my right arm. Bravely and against all odds, we attacked the downpour that greeted us. Nothing was going to stop our impending engagement just as nothing would stop us in our journey of life and love.

As soon as the rain hit the umbrella, she let out a soft sigh, realising that she started to get pelted by the merciless rain. I told her, almost prophetically, to “Just follow me”. 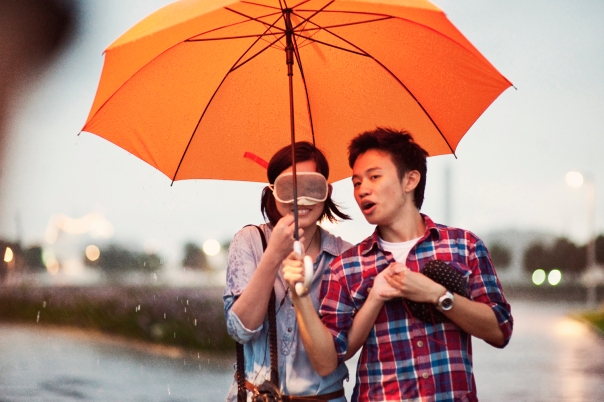 Next chapter: the love at first sight.

Apart from Jesus, I can do nothing; I am absolutely nothing without Christ.
View all posts by Joey Asher Tan »